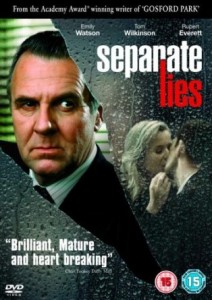 Balchin wrote his first screenplay (an adaptation of Howard Spring’s novel Fame is the Spur) for the Boulting brothers soon after World War Two. He continued to write for the silver screen for roughly the next 20 years. Balchin’s successes as a screenwriter include Mandy, The Man Who Never Was (for which he received a BAFTA) and adaptations of his own novels Mine Own Executioner and A Sort of Traitors (which was retitled Suspect for cinema release).

Balchin’s work has also been brought to the screen by others. Powell and Pressburger made a superb, atmospheric version of The Small Back Room in the late 1940s and, much more recently, Downton Abbey writer Julian Fellowes debuted behind the camera with an update of A Way Through the Wood that he retitled Separate Lies.