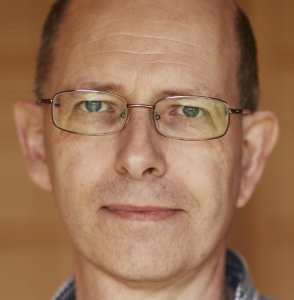 I was born on the western fringes of London in 1965, brought up in Oxfordshire and still live in the county today. I have spent well over 30 years working in scientific, technical and medical publishing, latterly in a freelance capacity, and in recent years have successfully branched out by editing and proofreading novels and non-fiction books, mostly for the crowdfunding publisher Unbound.

In recent years I have established myself as the leading authority on Nigel Balchin and have had articles about him published in a wide variety of periodicals, including Book and Magazine Collector, This England, Wiltshire Life, History & Philosophy of Psychology, The Oldie, Slightly Foxed and The Psychologist. I have given a number of talks about Balchin and in January 2016 I appeared on BBC Wiltshire every day for a week to recount a series of interesting stories from Balchin’s life.

My introduction to Nigel Balchin came in 1991 when I found a copy of his best-known novel, The Small Back Room, in my local library. I had seen a notice for it in the endpapers of a book by another author, and therefore stumbled across Balchin quite by accident.

As soon as I read the opening sentence of The Small Back Room I was captivated:

In 1928 my foot was hurting all the time, so they took it off and gave me an aluminium one that only hurt about three-quarters of the time.

What I admired most about the book was the dry, laconic, world-weary tone of the narrator’s voice and Balchin’s sense of humour, which was dark and cynical, very much like my own. I was also intrigued by the unusual environment in which the book was set, namely a wartime scientific research establishment. Balchin seemed like a writer worth pursuing…

I quickly read the only other novel of his that was then in print, Darkness Falls From the Air, which I enjoyed almost as much as The Small Back Room. I then worked my way slowly but steadily through the remainder of the Balchin canon. In so doing I unearthed some gems (Mine Own Executioner, A Sort of Traitors, Sundry Creditors, The Fall of the Sparrow), a few duds (The Anatomy of Villainy, Kings of Infinite Space) and a handful of intriguing oddities (Lightbody on Liberty, Lord, I Was Afraid, Seen Dimly Before Dawn).

The qualities that I most admire in Balchin’s fiction are his realistic dialogue, his characters, the drama and tension he generates from the clashes between his characters, his psychologist’s interest in human frailties and the memorable workplace settings he deployed in his fiction.

As I began reading Balchin it soon became apparent to me that very little information existed about him and also that not much had been written about him, even during his glory days of the 1940s and 1950s. As a growing admirer of Balchin’s work I was desperate to find out more about this fascinating man who had written so many fine novels and to try to understand why his life had turned out the way it did. It didn’t look as if anyone else was going to write a biography of Balchin so in 2004 I volunteered myself for the task and began researching his life. In 2015 I put the finishing touches to a book that I called His Own Executioner: The Life of Nigel Balchin; this first biography of Balchin was published in September of that year. The story of Balchin’s life is an absorbing one and I hope that visitors to this site will enjoy reading the book I have written.

“Mr. Balchin is a writer of real skill […] He has established a firm monopoly on his peculiar but admirable territory.” — Philip Toynbee, New Statesman, 1943

A comprehensive selection of some of Balchin's finest novels will be reissued over the next few years. The first title, Seen Dimly Before Dawn, was published in November 2021. See elsewhere on this page for details of how to purchase a copy.