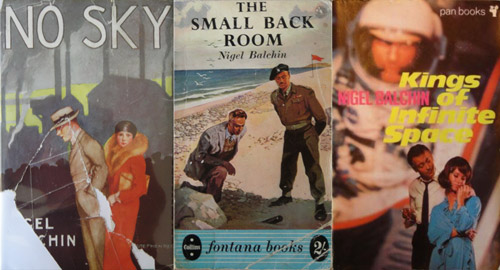 Between 1934 and 1967, Balchin wrote a total of 14 novels, many of them contemporary classics. Note that, although many people consider Lord, I Was Afraid to be a novel, it is really a play; however, I have placed it in this category for the sake of simplicity. Click on each book title for a brief overview. Longer synopses for all 16 of Balchin’s works of fiction can also be accessed by clicking on the dark blue text that you will find under the ‘Synopsis’ section of each overview.

Balchin’s only short story compilation was published towards the end of 1954. He did, however, write a handful of other short stories during his career (see Other Works for details of these).

Balchin’s first non-fiction book, How to Run a Bassoon Factory, was a satire of business methods and he wrote several other books in a similar vein in the mid-1930s. His first three non-fiction books were all published under the pseudonym Mark Spade, a name chosen so as not to antagonize his employers, who may have been angry had they discovered that a man on their staff had sufficient reserves of time and energy after a working day to compose works of literature. Balchin’s final piece of book-length non-fiction was The Anatomy of Villainy in 1950.

“He can always be relied on to give us the set-up magnificently.” – John Raymond, BBC, 1953